I found myself at a MLK rally, tears welling up in my eyes as the speaker lamented over the racial injustice present in the Philadelphia school systems. While state funding for education is supposed to help bring equality in district resources, Pennsylvania ranks the worst in allocating state funds to schools – widening the gap between rich schools and poor schools. The statistics are shocking:

•Pennsylvania schools that are in low income neighborhoods (and thus receive less local funding from taxes) get 33% less state funding per student than schools in high income areas (which already have more money) – widening the economic gap.

•On average, a student of color receives $2,000 less toward their education than their white peers.

•There is a Fair Funding Formula that assesses how much state funding schools should get based on various factors, yet only 6% of state funding for education is allocated according to the formula.

Legally, Brown v. Board of Education made segregation in schools unconstitutional. Yet, 64 years later, there is still not racial equality in schools.

I think of my students and how the Philadelphia public schools have failed them. Will I also fail them, or will I stand up for and with them – committed to their endurance and education?

It is so easy to feel the drudgery of my day-to-day. When a high school student is at a first grade reading and mathematics level, or when a fight breaks out, or when I get cussed out because a student got their phone taken away, I think “what am I doing here?” When I signed up for Mission Year, I did not imagine myself answering phones in a high school lobby. How is that working toward justice?

The year is 2018. Black History Month does not look back to the civil rights movement because the fight is over. Rather, it shows us similarities between then and now. We are still working towards King’s dream. It’s time to stand up for racial equality. We don’t have to wait for the next Martin Luther King Jr – we can band together and we can move mountains now.

*These quotes are taken from KIPP’s school poem that students recite daily. 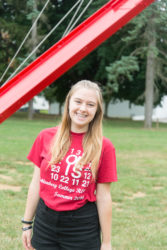